So, we left for Bay City on Monday afternoon and checked into our hotel, the which was rather crappy (the one across from KFC/TacoBell). Jenn went to see her friend Karen from SVSU while I hung out at home. My dad came over and we made some bbq chicken, and had some german potato salad, deviled eggs, roasted potatoes, and cheesy garlic biscuits. After Jenn was done and we sat and talked a little more, we went back to the hotel for the night.

Tuesday morning, we went to Macy’s to look for bedding, but found nothing good. On the way to Bay City we stopped at Papa Georgio’s for their pizza buffet, which Jenn enjoyed by I was rather so-so. We hung around at my house until about 4:30, then went to the mall and checked Younkers and JC Penny for bedding, before our movie at 6:05. Transformers was REALLY AWESOME! I liked it, Jenn was so-so. Nice to see guys from library, Jeremy and his girlfriend, Davey, and McGrath made it, rest were busy. Following that, we went to my house and walked toward Lafayette bridge to watch fireworks. We were rather tired after that, especially Jenn who was really being hit by a cold, so we stayed their for the night, and came home to Big Rapids Wednesday morning.

When we got to BR, we stopped at the airfest before coming home, which wasn’t real great. Later that night, we watched the BR fireworks from across the street. There was some guy who spent a crapload of cash in Ohio, and we actually thought he was the fireworks until the real ones began a while later.

While in Bay City, we picked up my aquarium, but couldn’t find anything here to put it on. We checked Meijer and Wal-Mart, and ended up buying a stand 1 size smaller, but after putting it together it obviously wouldn’t work.

Today, we went to Mt Pleasant and bought a proper stand, and a blue chiclid. We just got it set up and it seems to be happy, very active.

Sadly, I seem to have what Jenn suffered with for a weeks now. Hopefully it will be gone in time for her vacation. I think it is my August sickness, hope so anyway. I don’t want to go through this twice.

Tour de France begins today for anyone interested. As always you can catch it on Versus (formerly OLN).

OK, that is all. Here is a pic of fishy. 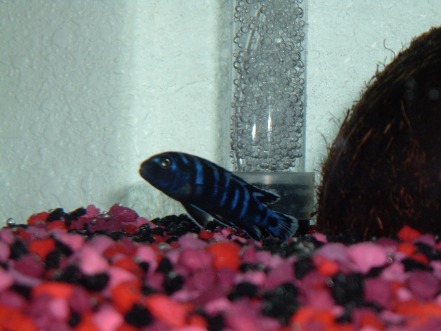 One thought on “Sick”